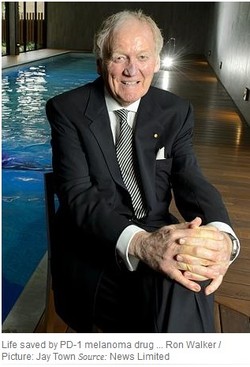 The MK 3475 Phase 1 Drug for Myloma. This is Mavis`s  New Trial. At The Royal Marsden. It has so much good response on Myloma it is thought to be the New Wonder Drug. The Royal Marsden are opening this trial to 4  Sufferers of Mesothelioma. The  Good News is Mavis is to be The First Patient. UPDATE 1st July 2014.This trial  is Closed  now to Mesothelioma Sufferers. For a Full  Description  and Details New hope for melanoma sufferers as the PD-1 drug will be given free to some patients Life saved by PD-1 melanoma drug ... Ron Walker / Picture: Jay Town Source: News Limited THE experimental wonder drug that saved Australian F1 Grand Prix boss Ron Walker’s life will be offered to Australia’ sickest melanoma patients. Hailed a miracle treatment by oncologists, the PD-1 drug will be given free to patients who have no other options.Following pleas from Mr Walker, cancer doctors, support groups and drug company Merck Sharp and Dohme, the Therapeutic Goods Administration has approved a limited release of the drug even though it is not yet registered for use.Results so far show up to half of advanced melanoma patients receiving the PD-1 drug known as MK-3475 respond to the treatment, compared to between 10 and 20 per cent using the most effective current treatment, Yervoy.The treatment will be granted to a handful of extreme cases each month. Mr Walker said it was an amazing feeling, knowing others would be given a shot at life. “Without the drug I wouldn’t be here,” he said. “It is absolutely so simple. “Before I had the drug and I was diagnosed I had a group of four doctors talk to me ... and the consequences were very clear: It was just a matter of time.“I was offered the opportunity to be part of the experiment and I seized upon it straight away, and just look at what happened to me.“It won’t be 100 per cent successful, but it provides ­people with a chance and that is what they deserve — a chance to get better.“Melanoma is the fastest growing cancer in Australia, it is everywhere, so people deserve to have the latest technology.”Mr Walker had his lifesaving treatment in the US as part of a clinical trial last year, then appealed to his friend Prime Minister Tony Abbott, Health Minister Peter Dutton and drug companies to improve cancer drug access here.The US Food and Drug Administration fast-tracked the drugs’ availability there. New generation of drugs called anti-PD1s and anti-PDL1s hailed by doctors as a potential cure for lung cancer Terrible toll... An X-ray shows tumours in a lung cancer patient. Source: News Limited DOCTORS are hailing a breakthrough in cancer treatment after new drugs have been found to clear tumours in cases of advanced lung cancer. One of the most deadly cancers, lung cancer has a low survival rate since it has often spread to other organs by the time it’s discovered, meaning that within a few months sufferers are usually dead.But drugs trialed in the US have shown extraordinary results clearing tumours in people in advanced stages of the disease.According to Mail Online , a quarter of 129 US patients with advanced lung cancer have survived at least two years after being treated with nivolumab.Nivolumab is one of a new generation of cancer drugs known as anti-PD1s and anti-PDL1s.In most cases tumours cloak themselves in a way that the body’s immune system is tricked into thinking that they pose no threat.Mail Online reported that the anti-PD1s and anti-PDL1s work by helping the body’s immune system recognise the tumour as an enemy.They have also been used to successfully treat skin cancer.“You would expect patients in that group to survive a few months, if you’re lucky. So to get 24 per cent living two years is extraordinary,” Dr Mick Peake of Glenfield Hospital in Leicester told the paper.Dr Peake said he saw one man whose lung cancer had spread to his liver, brain, bones and adrenal glands. Yet after a course of treatment with the new drugs there was no more evidence of the disease, he said. Create a free website Powered by Start