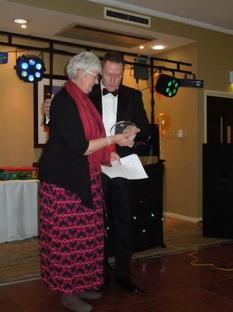 Living With Mesothelioma -My Diary- Started as a quiet day but then you never know in the house what will happen next !!! by rayandmave There was me thinking I hadnt had an exciting day as it was bank holiday. The roads into Whitstable were packed solid as so much traffic headed into my home town. It was crammed with visitors so we stayed home.

I sat in the garden and soaked up the sun, came indoors and watched the Queen and said I will pop on the computer and see what my friends are doing.
There was messages and emails galore to look what had been written in the Portsmouth Newspaper.

What was all this fuss and then I clicked on the link Christine had sent me and- Wow!!!!. Dear Chris Ward who sponsored my award at the IATP had written a great article.

Chris Ward, who runs asbestos training on behalf of his company, Havant-based Award Health and Safety. and is joined in IATP who are the first Asbestos  training company I know who also care about Mesothelima patients. We are not just a number we have become real people to  them and such great friends, they raise funds for DAST so they can help Mesothelioma Patients a s a support group.

They are having a Balloon Race in July keep watching for more details.
In   Birmingham Contact  so anyone can join in and buy a balloon contact

‘Asbestos is a time bomb and it’s all around’ It’s a silent killer. A ticking time bomb in your chest that hides its timer and doesn’t even let you hear the ticking as it winds down.

Until, one day, you might get a little short of breath while walking up a hill. You might feel a little bit tired all the time, but dismiss it as a side effect of getting older.

Except that’s not what happened.

For just six months, between 45 and 50 years ago, she washed the overalls her husband wore when he went to work at the dockyard in Chatham.

Nothing wrong with that. It was the 60s, and that’s what happened. But the trouble was his overalls were covered with asbestos fibres, and as Mavis washed them, she breathed them in – invisible fibres that are so small they travel straight down into the lungs. And there they wait, silent killers, waiting to strike.

‘For years I’ve been talking about ladies getting asbestos-related diseases from washing their husband’s overalls,’ said Chris Ward, who runs asbestos training on behalf of his company, Havant-based Award Health and Safety.

‘But I actually met Mavis.

‘She and her husband Ray have been married for 51 years. They went on holiday together and Mavis found she was getting short of breath.

‘She went to have some tests when she got back, and they ended up draining all this liquid out of her lungs.

‘They tested it and found she had mesothelioma, and gave her three months to live.
‘But that was five years ago and she’s still here.’
There is no such thing as safe asbestos.

Some people would have you believe that so-called white asbestos won’t kill you, and instead it’s the nasty brown and blue asbestos that will. It’s not true. While white asbestos may be slightly less nasty than the brown and blue stuff, it will cause just the same cancer if it is inhaled.
So what is asbestos? Chris says it is found naturally in rock. The fibres are extracted and then mixed with other things, like concrete.
‘Asbestos is wonderful stuff,’ Chris says confusingly.
‘More than 3,000 products contain asbestos, but most people just think of it as being in the garage roof, or in their ceiling tiles.
‘But we used to use it in all sorts of things, like in concrete to make it stronger.
‘Or in pipe lagging because of its insulation properties.
‘We even used to coat car parts with it, and make fire blankets with it because it’s flame retardant.

‘The Romans used to weave it into napkins, then to clean the napkins they’d chuck them on the fire. The blood and food would burn off, but the napkin itself would be fine.’
But therein lies the problem. Brown and blue asbestos was outlawed in this country in the 1980s.
White asbestos followed suit in 1999. Every building in Portsmouth, including the Guildhall, pictured, is, in Chris’s words: riddled with the stuff.
In fact, he says the only iconic structures not to have asbestos in them in Portsmouth is probably the Spinnaker Tower and the new Mary Rose Museum.
‘It’s in your home,’ he said.
‘If you knock through a wall, chances are your whole house is contaminated with asbestos fibres.
‘If you had a builder do it, they should have considered that before they carried out the work, but in reality they don’t

‘You could be sitting on your sofa, and it could be covered in asbestos fibres.
‘What about schools? The maintenance people might go around drilling into walls and ceilings, releasing asbestos into the atmosphere.
‘In the last 10 years in the UK 228 teachers have died from asbestos-related diseases.
‘In the US, figures show that for every one teacher who died, nine pupils have also died.’
Luckily, getting rid of the fibres is easy. All you need to do is call any company who will do an asbestos air test, which costs £71 and will give you an asbestos fibre count.
If there is asbestos, the company will perform an environmental clean, which removes the fibres. They’ll do another air test to confirm everything is safe again.
Chris’s aim is to see every school maintenance person, every builder and handyman, business people, landlords and others fully aware of the dangers of asbestos.
He is a founder member of the Independent Asbestos Training Providers (AITP) organisation, which seeks to raise awareness of the its dangers, and how we are surrounded by it in every day life.
One of the things it is trying to do is persuade DIY firms like B&Q to carry leaflets warning of the dangers.

The organisation also raises money for charities which help people like Mavis, who are trying to live with the disease.
Chris said: ‘It’s not true that a single fibre will kill you.
‘But we don’t know how individual people will react to it.
‘Mavis got mesothelioma from washing her husband’s overalls for six months years ago. But Ray is fine.
‘One gentleman I met, who was 71 at the time, was an apprentice and used to actually saw it up every day and then in the breaks he and his mates would throw balls of it around as if they were having a snowball fight, and he’s as fit as a flea.’

WHAT IS ASBESTOS AND HOW DO YOU GET RID OF IT?
There are three types: brown, blue and white.

Brown and blue asbestos are amphibole fibres, which means the fibres themselves are like needles.
They’re resistant to everything, including water, fire, electricity and sound. For that reason they are mostly used in ceiling tiles, artex, bath panels and have been sprayed on car parts.
The fibres can only be seen under a powerful electron microscope, and are called brown and blue because of the hue they give off.
Both brown and blue asbestos was banned in the UK in 1985.
White asbestos, Chrysotile, is best for weaving because its fibres are curly. That’s the fibre that’s used in concrete, so will be what your garage roof is made of, will be hiding in your walls, and makes up the vast majority of asbestos found in the UK today. It was banned in 1999.
So how do you get rid of asbestos? The white stuff is easy to get rid of, as you don’t need to have a licence. However, any person who says they can get rid of it must have a certificate to say they are insured specifically for asbestos removal. The risk is, if they don’t, the asbestos will just be dumped.
However, for blue and brown asbestos it’s more complicated. Firms taking that away have to have a licence from the Health and Safety Executive, and will need to remove the asbestos in controlled conditions to ensure there’s no contamination.

‘It’s very hard and very expensive to get that licence,’ said Chris.